Building gauges for ETFs rather than LPs

In this discussion, I am referring to a recent tweet from Kassandra: 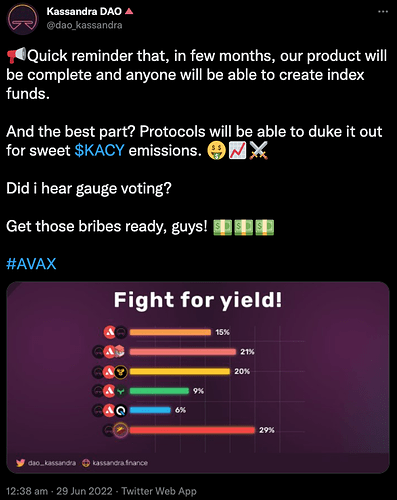 Gauge voting sounds great, but in my humble opinion Kassandra should focus on incentivizing the key value proposition of the protocol - create & invest in decentralized ETFs, rather than using $KACY for incentivizing LP tokens for 4 reasons:

Besides not being in favor of incentivizing LPs, I think there is huge potential for building a gauge system and a stronger use case for $KACY. My proposal is to:

1. Build gauges for ETFs rather than LPs

The first assumption is that gauges for ETFs will make $KACY more valuable for fund managers because they will be able to use it to vote on distribution, incentivize more users to use their ETF & earn more management fees.

The second assumption is that gauges for ETFs will make $KACY more valuable for investors because they can use it to keep voting for their favorite ETFs, decreasing the selling pressure from rewards.

This creates a positive flywheel effect around the key value proposition of the protocol.

2. Decrease or remove incentives for LPs

Having thin liquidity is an advantage at this stage, as it requires less buy pressure to increase mcap of $KACY. Higher macap → higher $KACY price in treasury → more value we can distribute for rewards.

This will also increase the happiness of your early evangelists (in this industry we build our #1 fans by allowing them to get in early and take them on the upside journey with us). Only when we get to 50x from where we are now (that’s less than $4 per $KACY, I’d start considering deepening liquidity → making $KACY price more secure).

I think you are absolutely right, voting gauge for ETFs will have a much better effect for the protocol…

Perhaps the post made on twitter didnt have enough examples, but those were supposed to be protocol made index funds, not plain old LPs. Your proposal is what i wanted for the protocol, though.